Current ambitions for NHS reform rest on Sustainability and Transformation Plans (STPs). These aim to bring local leaders together to create cohesive systems of care that are proactive, not reactive, with a focus on prevention and care being delivered in the community rather than in hospitals. They also aim for health and social care systems to properly exploit technology. All this will save time and money and deliver better quality care.

In their current form, however, STPs are not going to work. This paper identifies the three key barriers to success and sets out the five changes that need to be made if the plans are to succeed.

Every NHS organisation and local authority needs to be involved if the plans are to succeed but the paper finds engagement to be mainly dominated by Clinical Commissioning Groups and NHS providers, with input from other parties limited. Many GPs and consultants had not even heard of STPs. Some local authority representatives were being expected to represent other local authorities or were only consulted on parts of the plan. There has been public backlash over proposals to close A&Es and perceived secrecy surrounding the plans. There is concern politicians will withdraw support for controversial decisions. Coverage of mental health in the plans has generally been insufficient, with many first drafts not even mentioning mental health.

Secondly, STP participants have reported mixed messages from national bodies, with NHS England focusing on transforming the system and NHS Improvement on balancing the books in the short-term. There have even been contradictory messages within the organisations themselves.

Finally, STPs have struggled with a lack of authoritative leadership. They are a conglomeration of health and social care bodies rather than legal bodies in their own right. Each organisation within the STP has its own statutory responsibilities and is held accountable to its own regulatory bodies. This presents challenges to collaborative working when organisation-level interests conflict with those of the STP as a whole. Local leaders are unclear as to what extent they can lawfully collaborate without breaching competition legislation. Having different funding streams for different organisations makes it difficult for local leaders to move the money to where it will have the most impact. 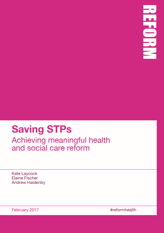