Video: An Alternative Guide to the New NHS

In recent years, our health system has undergone profound change, with the 2012 Health and Social Care Act introducing the most wide-ranging reforms since the NHS was founded in 1948.

Watch and listen to this Kings Fund animation, which gives a whistle-stop tour of where the NHS is now – how the new organisations work and fit together – and explains that our new system is as much a product of politics and circumstance as design.

Image of the Structure (Video at the bottom of the page): 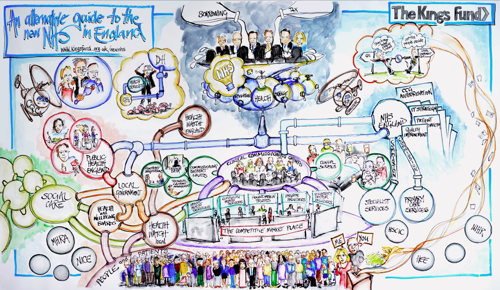 This animation was created in June 2013. Since then, there have been some changes to the way the system works:

Work is also ongoing to change the way in which specialised services are commissioned, including more collaborative commissioning between CCGs and NHS England.

Some CCGs are supported in their work by six (down from 19 when CCGs formally launched in April 2013) commissioning support units (CSUs) – although some also commission support from independent sector providers. Clinical senates and strategic clinical networks also provide expert clinical advice on issues that go beyond the remit of an individual CCG. There are also fifteen Academic Health Sciences Networks, intended to promote and encourage the adoption of innovation in health services. The remit of AHSNs is being considered as part of the Accelerated Access Review.

In 2016/17, there will be a mandatory minimum of £3.9 billion of pooled NHS funding to be spent jointly with local authorities as part of the Better Care Fund’s integration programme. Areas also have the flexibility to pool more than the mandatory amount.

From 1 October 2015 the responsibility for commissioning public health services for children aged 0-5 transferred from NHS England to local authorities. This marked the final part of the overall public health transfer which saw some wider public health functions (eg, services aimed at reducing drug and alcohol misuse) transfer to local government on 1 April 2013.

From 1 April 2016, leaders in Greater Manchester will start to have greater control over the region’s health and social care budget. This includes taking on delegated responsibility for several commissioning budgets currently controlled by NHS England, including for a number of specialised services and some public health services. These services will continue to be commissioned by NHS England, but decisions about service changes, finances, and quality and performance will be made through the newly appointed Chief Officer of Greater Manchester Health and Social Care, working with the 37 NHS organisations and local authorities in the region. Other areas are also pursuing ‘devolved’ arrangements.

The NHS five year forward view was published in October 2014, describing a range of changes, including new models of service delivery such as:

Since then, two further models have been introduced:

To implement these new care models, the NHS invited individual organisations and partnerships to apply to become ‘vanguards’ for the new care models programme; 50 vanguards have now been established across the country.

An alternative guide to the new NHS in England from The King's Fund on Vimeo.